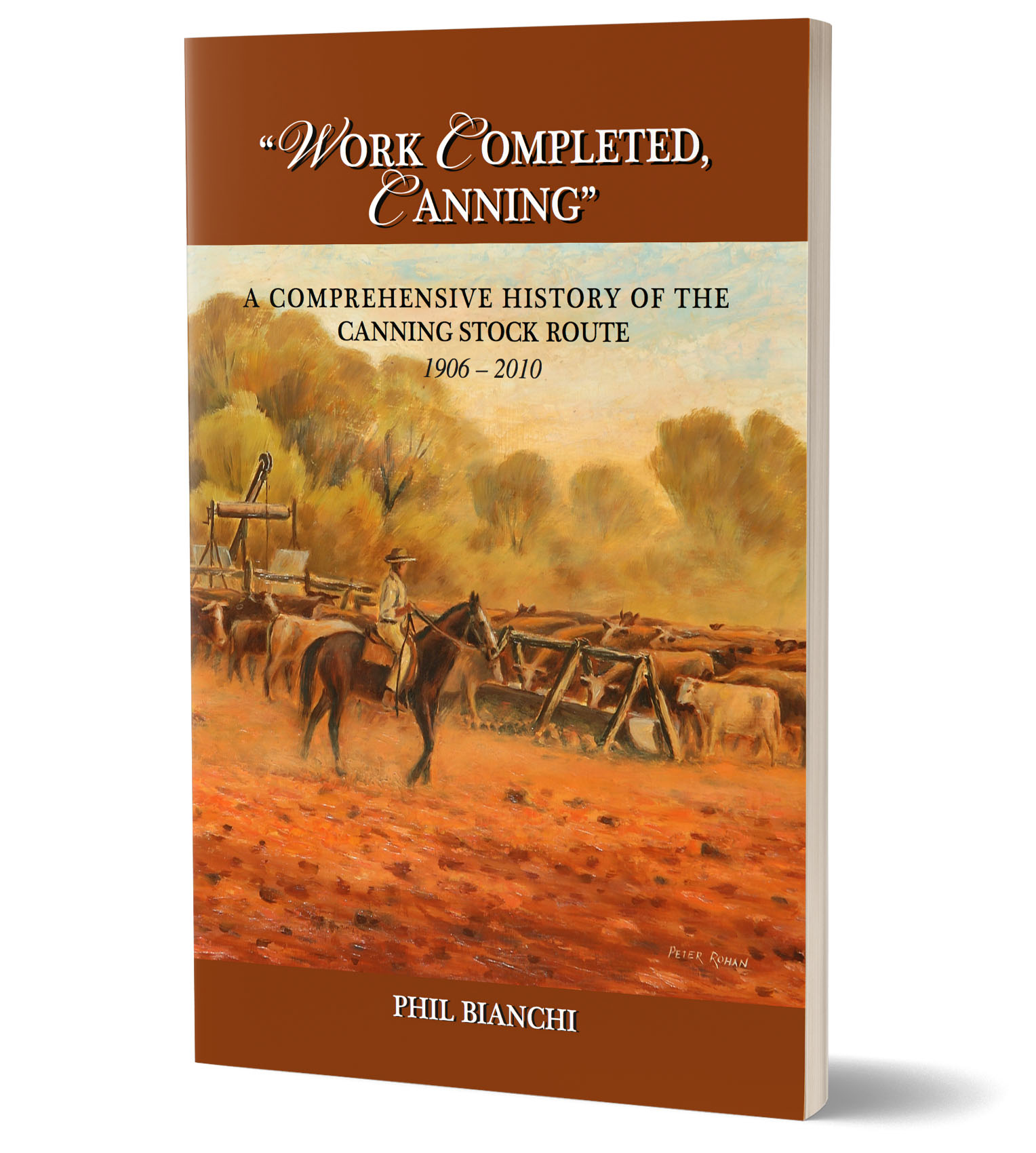 A comprehensive history of the Canning Stock Route 1906-2010

The story of Alfred W. Canning and the development and subsequent use of the 1800 kilometre long Canning Stock Route from Halls Creek to Wiluna is told in this new volume.

Original historical documents are combined with oral history in a narrative that covers the origins of the stock route, surveying, construction of the wells, droving, deaths and murders, exploration and prospecting, well restoration, identities and adventurers, place name origins and tourism.

This new book features photographs, maps, exploration and droving journals that have never been published before. Mysteries of the stock route are solved, and long-held beliefs and myths corrected. Phil Bianchi’s research is complemented by expert analyses of flora, fauna and pasture.

A dispute in WA history — Can we be sure about the past?

Member Phil Bianchi, bush historian and four-wheel drive travel writer, is an expert on the history of Alfred Wernam Canning, surveyor and explorer, and of the Canning Stock Route. Hesperian Press published his definitive work on the subject – Work Completed, Canning. A Comprehensive History of the Canning Stock Route 1906-2010 – in 2013. At 724 pages with 274 photographs and 38 maps, you might think that the last word has been written on the subject, [particularly given that Hubert Stanslake Trotman, Canning’s deputy, dictated his version of events to Eleanor Smith, who first published them as The Beckoning West back in 1966]. But the last word is never written or spoken in history! There remain differences of opinion on Canning’s treatment of Aboriginal people. Phil believes that, after his years of detailed research, he can be as sure as is possible of his conclusions. Given that the question of frontier violence is now a central issue in Australian history, Phil’s reflections are important.

‘The matter of A W Canning’s treatment of the Aboriginal people he encountered in his surveying work comes up time and again, and there is a view that Canning mistreated them. You will find this view well represented online; for instance, the National Museum of Australia maintains that Canning fed salt beef to chained Aboriginal people to promote thirst so they would direct him to water sources. Recently history revisionists endeavoured to have the names of the Canning River, Canning Highway and Canning Dam changed. I pointed out that the Canning after whom they were named was George Canning (1770-1827), an English Prime Minister, and not A W Canning (1860-1936).

A W Canning was an experienced bushman and Lands Department surveyor in 1906 when he was given the job of determining the feasibility of a stock route to bring cattle from the Kimberley to Wiluna to supply meat to the goldfields. He successfully surveyed a suitable route. Upon arrival back in Perth, Canning and his party were feted for their success in finding a stock route.

Edward Blake, the expedition’s cook, wanted to be in the well-sinking party which followed the initial expedition, but was refused. He then made claims against Canning and his second-in-command Trotman. Press reporting and the concerns of members of parliament resulted in a royal commission on the possible mistreatment of Aborigines during the exploration leg. Numerous people were called to give evidence. By the time Blake finished his evidence, he said that Canning wasn’t to blame, it was others in the group. His legal representative didn’t push the matter of Canning not being guilty. Neither Canning nor his men fed salt beef, salt water or anything else to promote thirst to Aboriginal people. If they had done so Blake would have had no hesitation in raising it in his testimony. He did not.

The royal commission’s findings were that Blake’s accusations were ‘the result of his own imagination, perhaps built upon some slight foundation’, as in the allegation of immoral behaviour with Aboriginal women. In that case however, as in others, the commissioners judged his motivation to be the ‘desire of injuring Mr Trotman’. After the royal commission Canning was selected to head the construction phase of the stock route (1908-1910) and in 1930 was asked to lead the well reconstruction team to get the stock route functional again.

Was the royal commission a whitewash? Possibly. However, when coming to an opinion about it, we need to ensure we are not looking back on 1906 with 2019 eyes and ideas. We need to remember that in that period people of all colours and creeds were hanged, and not too far before that convicts were sent to WA for what we today see as trivial offences. Three drovers, Thompson, Shoesmith and Chinaman were killed at Well 37 in 1910. In response, the government sent a punitive expedition led by police sergeant Pilmer. He reported to his superiors: ‘we dispersed 14 natives in the vicinity of the murder, all of whom were alleged to have been implicated.’ At that time ‘dispersed’ meant shooting to kill. Such was the thinking then.

Did Blake have an axe to grind against Canning and his party because they would not take him on the construction phase of the stock route? Canning and Trotman said Blake was a most disagreeable person and caused disharmony in the 1906-07 exploration party, hence they denied him any subsequent role. If they had allowed him to be a member of the construction party would there have been a royal commission? I suspect not.

Was Blake being bloody-minded or was there a whitewash? It seems clear that Blake was intent on causing Canning and Trotman damage. Whether there was any truth at all in his claims remains unclear; perhaps, as the royal commissioners concluded, there might have been ‘some slight foundation’.

I want people to understand our history and, although we may find it abhorrent, that’s how things were back then. We shouldn’t seek to diminish it, to hide the truth; likewise we shouldn’t manipulate and interpret it to suit our agendas. I want history to be told accurately, no matter how distasteful we may find it or that it doesn’t suit current thinking.’

Everyone at the Society congratulates Phil on his OAM awarded in this year’s Australia Day Honours List. It is well deserved!